Someone shot police. Two died. Eight were wounded. That is not political theater

The Chief Navigator came on TV and gave a self serving spiel that no one believes! And the Master and the Upper Chamber and Privy Council and also the Logan Party are all demanding a full investigation of the riot. But then the Chief Navigator pushed back with telecasts of wounded police and photos of silhouettes of what appears to be protestors shooting at police. Someone shot police. Two died. Eight were wounded. That is not political theater. That is two dead guys just doing their job. Widows. Children. Apparently that caused the riot police to overreact. It was night and no one knew who was shooting whom.  And bureaucrats in Old Gildagad House have confirmed someone fire bombed the hallowed bastion during the riot. And the Modern Common Law Court was fire bombed. Not bad. Yet. Maybe it was an architectural critic. The place is a monstrosity. And someone tricked one of the armories to open to haul off over 300 weapons and ammo. That is a fact. I have watched the protestors all of this week. I don’t know what to do. Should I join them? Fight them? What do they stand for? What are they protesting? Who knows who the organizers are? The leader of the organizers has never ever showed her face. Maybe we are all being manipulated. But then who? Who is playing us? I am confused where my loyalties lie. 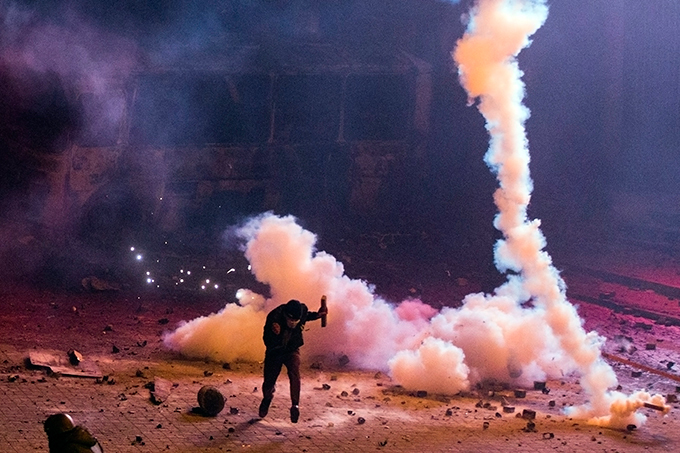 They are back! Every sort of chap is there! Young teenagers in masks! Old guys! They must be their fathers! Mums! Grannies!