I don’t know how to pray. I always thought anyone who decided to be a priest was a fool

I climb up a park oak and see the battlefield. The riot police have redeployed across Moon Traffic Circle in front of the Lower Chamber of the Steering Committee. The bomb I heard earlier was near the Royal Rockery of Ravens. The birds all got loose. I see Royal Ravens waddling and hopping everywhere like huge black blots pecking away at some dead dogs. Two dead bodies are still in No Man’s Land. A Buddhist priest and a Catholic priest risk their lives and go to the bodies. One dead body is a protestor. One dead body is police. They call out. More priests of every religion come into No Man’s Land trusting only in their religious livery to protect them. A pair carry one body into the protestor camp. One pair carry a body toward the police who part their shields to receive it. Other priests and also as Jewish guy offer a crudely cobbled universal prayer for everyone who had died during the night. I never thought about religion before. I don’t know how to pray. I always thought anyone who decided to be a priest was a fool. No money. No success. Nowadays the only obvious religious hoity-toity holies are mad mullahs. So who respects guys in religious livery? Today fools in religious livery are risking their lives. 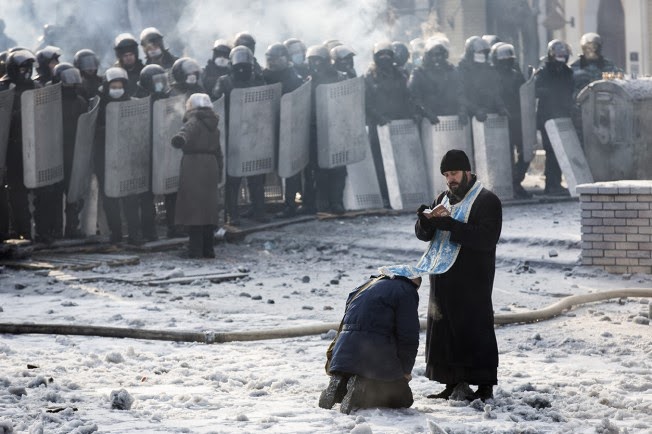 The scene at dawn