I am back to the commutation tent. Reports are confusing. A lot of the amateur cyber reporters are shell shocked. Only the three English tourists are professionally typing away. I am so dazed I just stare at the flickering screen. Then I just blog this. Despite being Spring the snow alternates with fog which gives the images an unearthly quality. The police have set up a long shield wall of riot shields as if reenacting some medieval battle of some distant bygone age. They wear black riot gear and helmets with visors as if some old time knight in high tech gear. Their riot shields are steel with a grid of holes. They interlock their shields just like an ancient shield wall. They stand silent as a slight snow comes down to dust them with white. If they panicked last night they are under control now. If they were shot at during the night just like the mounted sheriffs they are under control now. They form a long black line along the Lower Chamber of the Steering Committee and other governmental buildings. I can’t blame them if snipers were shooting at them last night. Their job is to guard the government. Until now the government of Zendula as always been lawful. Boring. But lawful. They are only doing their job. They are protecting the government. It is not their fault the Chief Navigator is exploiting the government they are sworn to protect to become Nixon on Steroids.  I think some look scared actually. Scared but resolute. Like us. I imagine the Chief Navigator must be holding an emergency session to explain this mess to everyone. And the Mayor of The Havens is the Referee of the Lower Chamber. She must be pissed! Her city is trashed! That cow with a handbag had better commit to one side or the other!

I see organizers dressing the old Falconer statue with flags and protest signs. By tradition protests can be held under the protection of that stature. Old Falconer must be pissed. Rioting right under his stony eye! The Moon Traffic Circle is filling up with more and protestors but the Tube Station is still closed and locked. Why? The mounted sheriffs have redeployed and formed a new shield wall between us and the riot police who have retreated to the far end of the traffic circle to stand at rigid attention. So organizers are seizing control of the circle. One guy orders me to seize control of the Fountain Court. I dutifully run to the small wedge shaped bastion where protests and petitions are suppose to be placed to appeal to The Conscience Of The King. Other people are there as well. Mums and grannies are on their hands and knees scrubbing the steps to the Fountain of Mercy to clean up debris. Empty teargas canisters. Rubber bullets. Plastic containers and jugs one filled by icy water to be lobbed. Some rocks. One granny assures me the Fountain of Mercy is not damaged. Everyone is relieved. I take iphone photos and tweet the vision of middle aged motherly protestors cleaning up the riot scene.  It is getting out of control. And no one even understands how it started. 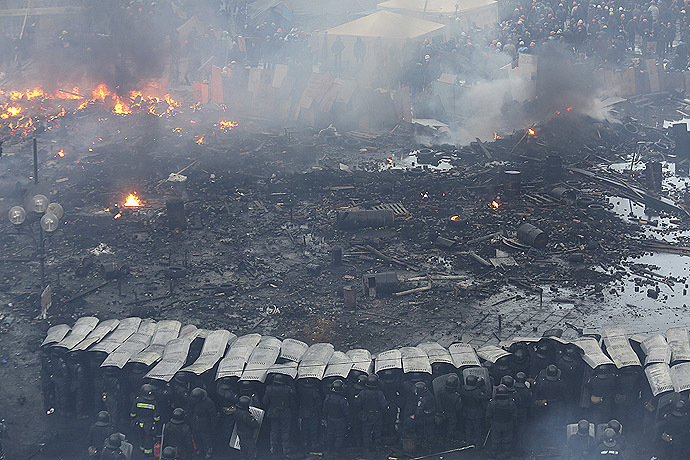 A Capitalist is the guy who sells the rope used to hang him!